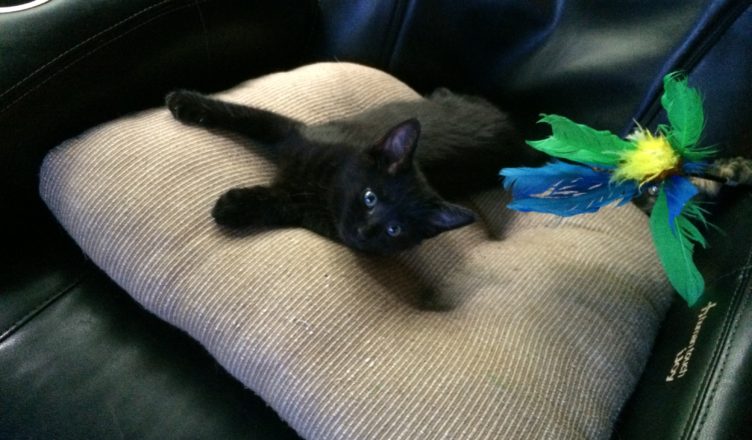 All posts may contain affiliate links. Please read my disclosure for more info.

Why do cats purr, anyway? Here are 4 reasons why:

Cat owners believe their cats purr when they’re contented and this is backed up by everyday experience. They purr as their food is prepared, when they’re petted, and even before that first stroke they purr in anticipation of loving attention. Some purr loudly, some softly, and a few seem not to purr at all. The lack of a purr isn’t necessarily a cause for concern; some cats have an almost inaudible purr. If a cat who normally purrs stops doing so, it’s worth considering a trip to the veterinarian’s office.

They purr to communicate with other cats

Kittens start to purr within a few days of birth. They do so when they feed, when their mother grooms them, or simply when their mother is near. For kittens, the purr is probably not only a sign of contentment but also a way to send the message: I’m all right, Mom. Older cats are thought to sometimes use their purr to show an attitude of non-aggression towards other cats. It can also be used as a greeting.

Cats purr to soothe themselves in stressful circumstances

Cats purr in the most unlikely of circumstances such as when they’re frightened or uncomfortable. Some purr when they’re being examined by a veterinary surgeon. In these cases, the purr is likely to be part of a cat’s response to stress. It may have a calming influence.

They do it to aid the natural healing process

The most intriguing possible function of a cat’s purr is that of healing. The rhythmic humming of a cat’s purr includes some of the frequencies used in vibration therapy to treat bone fractures, bone weakness, muscle damage, and reduce pain in humans. There are some who believe purring releases endorphin chemicals that can act as painkillers. If cats can use their purr to help heal their injuries and combat pain, this explains why they choose to use up valuable energy in what seems like an odd activity like purring while giving birth, after being injured, or when suffering from a serious illness.

How do cats purr?

Domestic cats, along with some of the big cats, such as the puma and cheetah, are able to purr. The sound is believed to arise from air vibrations produced by very fast movements in a cat’s throat. These vibrations produce the characteristic thrum of the purr as a cat breathes in and out. It isn’t certain whether cats choose to purr or whether they create these sounds as an automatic response to situations involving strong emotions.

The purr is more than an audible cat smile. It could be a form of inter-cat communication, a means of self-soothing in stressful times, and an internal healing mechanism. What clever little kitties they are!

View all posts by carolinekearns →

This is How to Heal an Open Wound on a Cat

How to Tell If Your Cat Has Fleas

Why Do Cats Purr? Here are 4 Reasons

Are Essential Oils Dangerous to Cats?